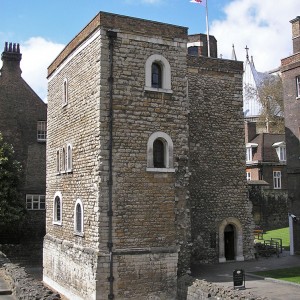 The Jewel Tower survives, in the care of English Heritage, but is separated from the rest of the palace today by a busy modern road. In the middle ages, it stood at the south-west corner of the palace, right by the moat.

It was built by Edward III in 1365-66 to house his treasure collection. Nearby were the private royal apartments, gardens and housing for the court, as well as kitchens and bathhouses.

The Painted Chamber and the Chapel of St Mary le Pew 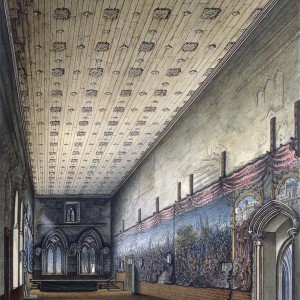 There were two ways to reach the more private areas of the palace from St Stephen's Chapel. You could walk to the western doors, across a courtyard and then into the Lesser Hall, or you could enter the small side chapel of St Mary le Pew, at the east end on the south side, and then go down a gallery into the king's great chamber.

Also known as the Painted Chamber, this survived until the major fire at Westminster in 1834.

St Mary le Pew housed an image of the Virgin Mary that was also a pilgrimage destination. 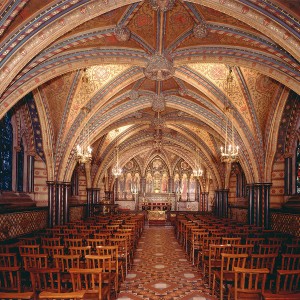 St Stephen's was a palace chapel on two levels. The lower storey was dedicated to the Virgin Mary, and known as St Mary Undercroft.

After the dissolution in 1548, the space was used for other purposes, including as a dining-room for the Speaker of the House of Commons.

Protected by its stone vault, the medieval structure survived the fire in 1834. It was then extensively restored for worship, and remains a chapel today. 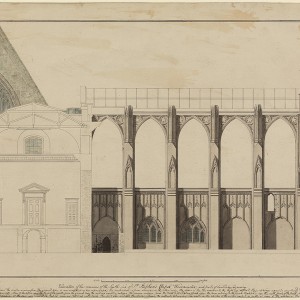 Detailed surveys of the exterior of the medieval building were made from the 1790s, especially by John Carter and Frederick Mackenzie, whose work was published in 1795 and 1844 respectively.

This is Carter's reconstruction of the south side. It does not show the top level of windows, or clerestory, which had been removed in 1692. 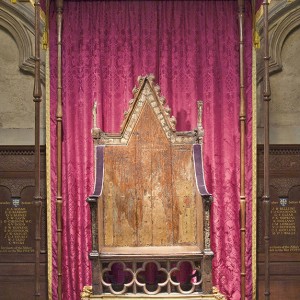 Westminster Abbey was home to the shrine of St Edward the Confessor and the place where kings of England were crowned. Many were also buried there. The church had been rebuilt extensively from 1245 by Henry III.

The abbey was the largest landowner in the town of Westminster and the wealthiest abbey in the country.

Its relationship with the neighbouring chapel and college of St Stephen was often troubled. In 1324, a mason working on St Stephen's was killed by monks and servants of the abbey; the case was never fully resolved.

Image: The Coronation Chair, commissioned by Edward I in 1296. © Dean and Chapter of Westminster 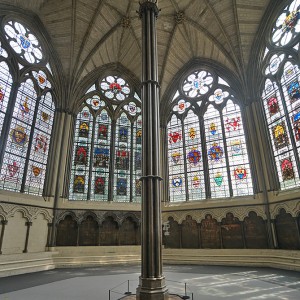 During the medieval period, the House of Commons did not have a dedicated space all to itself, and parliament had not yet permanently settled at Westminster, although it was the most common location. When parliaments did meet at Westminster, the monks of the abbey had MPs as their guests.

The Commons gathered either in the monks' chapter house, which is still standing, or their refectory.

The MPs were not always popular, and there were many requests for the king to pay for repairing damage they had caused to the abbey's rooms. 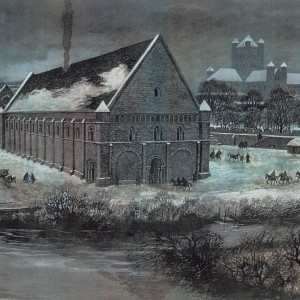 Westminster Hall was the oldest part of the palace, ready for use by 1099. The walls still stand today. While the hall was the venue for royal events such as coronation feasts, it was also a very public space. As the home of the law courts, it was full of people coming and going. The offices of the king's Exchequer also stood at the north end.

Visitors to St Stephen's would have entered the palace at the north end of the hall, from New Palace Yard, and then walked down to the doors at the western end of the chapel. They might also have approached it from the west, through Old Palace Yard.

Image: Reconstruction of the exterior of the hall, when it was first built. © Look and Learn/Peter Jackson Collection