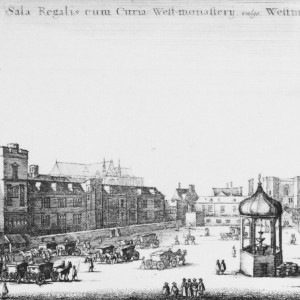 From the late fourteenth century, the dean and twelve canons of St Stephen's College lived just to the north of the Palace of Westminster, on the street called Canon Row which still exists today.

Each canon had a house with a garden stretching down to the riverfront. The dean also lived in the area north of New Palace Yard from the fourteenth century onwards.

The college owned the clock tower here, which they maintained until the sixteenth century. It was the forerunner of today's Big Ben. 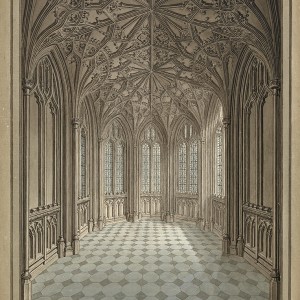 St Stephen's College had been founded in 1348 to look after the chapel. It needed housing and other buildings, such as a chapter house, and a communal hall for the vicars and clerks.

In the late fourteenth century Richard II built a cloister for them, which was replaced in the sixteenth century by one that survives, in part, today. It has two storeys, and originally joined together the chapel, Westminster Hall, the vicars' houses along the river, and the vicars' hall and the belfry to the north.

The cloisters are beautifully vaulted, as shown in this view. 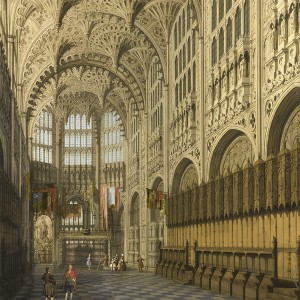 In 1502, Henry VII began to rebuild the Lady Chapel of Westminster Abbey in the latest style, with an elaborate stone vault, known as a 'pendant vault' for its hanging bosses. He also built almshouses in Westminster as part of the same project, which do not survive.

The chapel remains to this day, and many monarchs have been buried there. It was originally intended to provide a shrine for the murdered king Henry VI, although he was not ultimately made a saint. Instead, Henry VII and his wife, Elizabeth of York, were buried there, as were all of Henry VIII's children and James I. 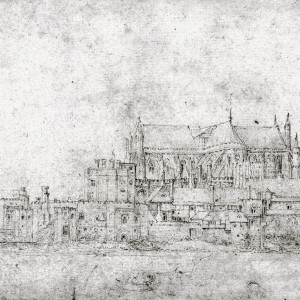 The medieval building was a striking feature of the palace from the River Thames, as shown in several panoramas that were made before the destruction of the upper storey in 1692.

The earliest may date from c.1530, when the chapel was still in use by the college. Today, the drawing survives in two parts. This portion, in the Victoria and Albert Museum, includes half of the east façade at the right-hand end. 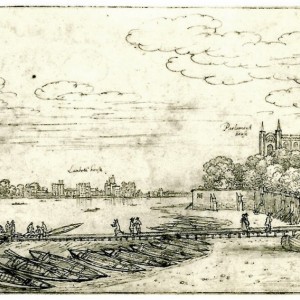 For most of St Stephen's existence, many visitors and residents came to the palace by boat rather than by road. The river was full of traffic, as people came and went.

The king's barge would usually come up or down river from London or Richmond, and so the main entrance was the King's Stairs or the Watergate.

In 1486, when Henry VII returned from his first progress around the kingdom, he was met at the Watergate by St Stephen's canons and Westminster Abbey's monks for a procession to the abbey. 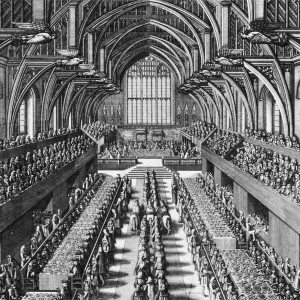 Westminster Hall, as it survives today, was transformed at the end of the fourteenth century by Richard II. He added the hammer-beam wood roof, statues of kings high up on the south wall and a north porch.

Henry Yevele and the carpenter Hugh Herland were responsible for designing the roof, so that there was no need for any columns to support it in the middle. It is the largest medieval timber roof in Europe.

It amazed contemporaries, who crowded in to attend the courts in the hall or royal events.

Image: 'A Prospect of the Inside of Westminster Hall, showing how the King and Queen, with the Nobility and others, did sit at Dinner on the day of the Coronation, 23rd Apr. 1685', by S. Moore. Engraving. Palace of Westminster Collection, WOA 1268. © Parliamentary Art Collection.