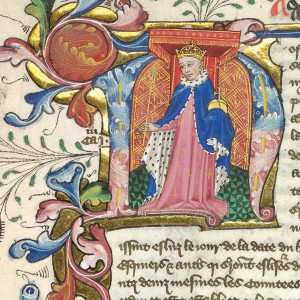 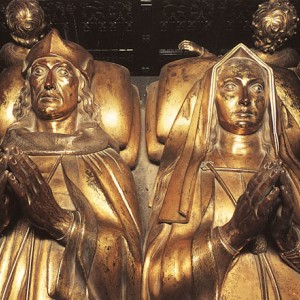 On 2 February 1415, the medieval feast known as Candlemas, Henry V and his court were present in St Stephen's Chapel for mass. He was staying at the palace, as he prepared for his French campaign, which would culminate in the battle of Agincourt on 25 October 1415.

The mass was a particularly grand occasion, and the offerings made by the king and nobles were enormous. The Archbishop of Canterbury noted that the total was one hundred pounds of wax, four pounds and twenty pence of gold, and twenty shillings and a penny in silver.

Elizabeth of York was not crowned immediately after her marriage to Henry VII in 1486. Instead, the coronation took place the following year, on 25 November 1487, after the birth of her eldest son, Prince Arthur. As usual, she was crowned by the Archbishop of Canterbury in Westminster Abbey, and then there was a feast in Westminster Hall.

The very next morning Elizabeth, Henry, Henry's mother Margaret Beaufort and eighty other ladies squashed themselves into St Stephen's for a celebratory mass. We're not really sure how they all managed to fit in!

Image 2: Elizabeth of York and her husband Henry VII are commemorated in Henry VII's Chapel, in Westminster Abbey. Their gilt-bronze and marble tomb monument is by the Italian sculptor Pietro Torrigiano (contract dated 26 October 1512). Public domain