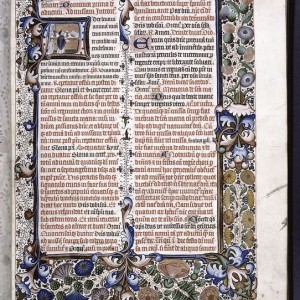 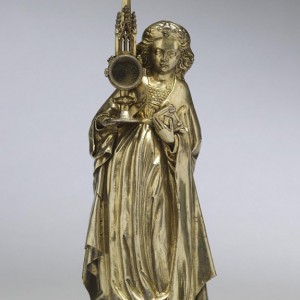 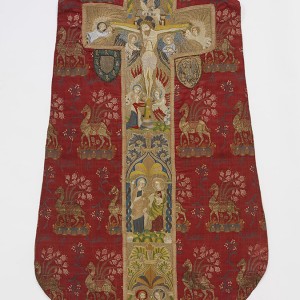 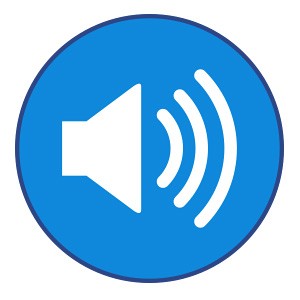 On any ordinary day, the college would gather in the choir to sing at least three masses (the high mass, the Mass of the Dead and the Lady Mass), along with other minor services.

The canons were mostly present for high mass. The vicars, the canons' deputies, had to be present for all the services. This picture shows a priest celebrating mass, in a missal (or mass book) that may once have been used at St Stephen's.

On saints' days the services were longer and more elaborate. You can listen to a piece written for St Stephen's Chapel in honour of their patron saint by clicking on the audio icon, below right.

Standards for the singing of services were high. St Stephen's was one of three institutions in England with the right to take promising choristers away from other choirs. They were protected from such poaching themselves.

We learn that the high altar was very richly furnished from an inventory of the college's possessions, made in 1548.

Surprisingly, the college still had statues of St Stephen, the Virgin Mary and St Barbara. These types of images had been banned a few years earlier by Henry VIII, when he abolished prayers to the saints. St Stephen's thus had resisted one part of Henry's reformation successfully.

In the late medieval church, different colours of vestments and altar hangings were used at different times of the year. St Stephen's owned a large variety of such things, often given by canons or lay donors. For example, the 1548 inventory records that the last dean, John Chambre, had given a set of cloth of gold with a red pattern.

Image 1: This missal was owned by John Chambre, the last Dean of St Stephen's, and possibly given by him to the college. Missal of the Sarum use, late 15th century. New York Public Library, MS MA 63, f. 8r.

Audio: Listen to part of the Agnus Dei from Missa Lapidaverunt Stephanum by Nicholas Ludford. The recording is from 'Chorus vel Organa: Music from the Lost Palace of Westminster', sung by the choir of Gonville and Caius College, Cambridge, with Geoffrey Webber director, and Magnus Williamson on the organ. Available now on Delphian Records.