The House of Commons' Surroundings 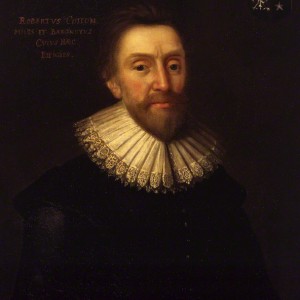 In 1622 the antiquary Sir Robert Cotton bought this property to house his famous library of manuscripts. Re-named Cotton House, it was frequently visited by MPs researching parliamentary history.

John Selden described Cotton's library as a place to "search after the inmost, least known and most usefull parts of Historicall Truth".

MPs visiting the House of Lords used a covered walkway though the courtyard. A formal garden led down to a staircase to the river. 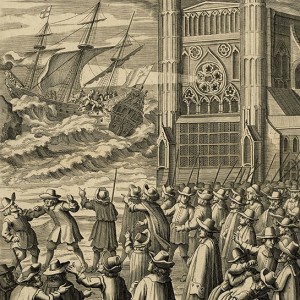 In the seventeenth century, the Commons met before midday. As the medieval stained glass had been removed, bright morning sunlight could make debate very difficult.

A solution to this problem was reached in 1621, when a timber shed or 'penthouse' was built over the chamber's east window. This contained a vast canvas sheet, or 'awning' which filtered bright sunlight.

It was frequently repaired, as in 1645 following storm damage, but was finally demolished in 1692.

Image: Frontispiece to the second volume of John Nalson, An Impartial Collection of the Great Affairs of State, London, 1683, by Robert White. British Museum, London, BM 1887, 0811.1288. © Trustees of the British Museum.