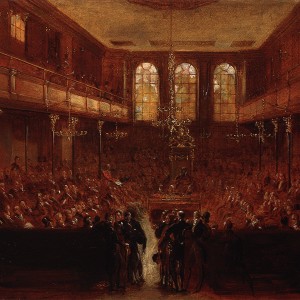 On 4 June 1832 the Reform Act was finally passed in both Houses of Parliament. This addressed some of the problems of corruption and the abuses of the electoral system.

However, St Stephen's was an increasingly unsuitable home for the business of the reformed Commons. By 1832, the chapel was home to 658 MPs, but only around 300 could be accommodated on the floor of the chamber.

The cramped conditions led one parliamentary reporter to christen St Stephen's as the "second edition of the Black Hole of Calcutta."

As a response to complaints about conditions in St Stephen's, two select committees in 1831 and 1833 discussed new accommodation for the House of Commons.

In 1833, John Soane recommended that St Stephen's be converted into a lobby for a newly built House. The committee accepted the proposals, but no changes were made to St Stephen's due to the financial cost and the attachment of MPs to the old building.