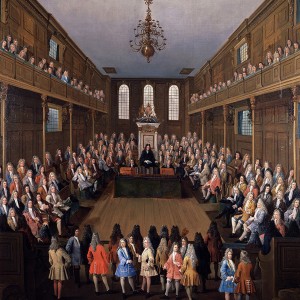 Although many of the benches in the House of Commons were facing each other, the arrangement of furniture in the chamber did not automatically lead to a two-party system.

From the Jacobite rising of 1715 until the 1760s the Whigs were the dominant party of government and enjoyed the support of the king. By 1754 it was increasingly difficult to tell the difference between Whigs and Tories, as politics was not carried out on those terms and party labels were fluid. William Edwardes was classed as a Tory in 1754, although in 1761 he was treated as a Whig by the Duke of Newcastle.

The concept of political parties was still fluid in the second half of the eighteenth century and in 1762 the king admitted that there were no party divisions. However, party lines began to emerge as a response to the American and French revolutions.

Following the collapse of the Fox-North coalition in 1783, groups were focused around figures such as William Pitt the Younger and Charles James Fox, although there was still no national party organisation.