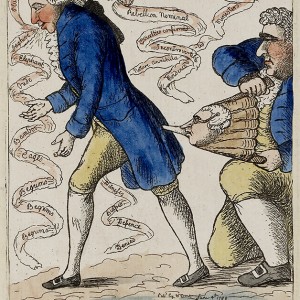 The reporting of parliamentary debates was against the rules of the Commons. Surprisingly, this rule remained in force until 1971, although newspapers regularly ignored it. In 1771 complaints by Colonel Onslow led to eight newspapers being summoned to the bar of the House. However, three took refuge in the City of London, which claimed exclusive rights of arrest and the officials refused to give them up.

The reporters were given minor punishments, but the Commons could not prevent the publication of debates without expense and the potential for embarrassment. From this point on verbatim reports of debates regularly appeared in the press.

By the time of the fire of 1834, the press was a means through which MPs communicated with the public. But in 1833, Daniel O'Connell asked for strangers to leave the chamber due to his ongoing dispute with reporters. The empty gallery had a "paralysing effect" on the eloquence of the members during the subsequent debate. Members had been accused of speaking to the gallery, rather than to the House, and the effect of the empty gallery appeared to prove that.