Women in the House of Commons 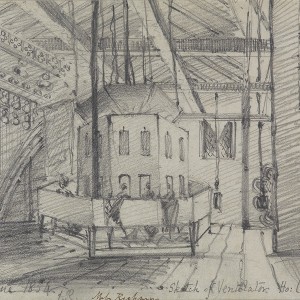 Although women were not technically supposed to enter the Commons Chamber, in fact, they did so for much of the eighteenth century. They were even allowed to remain when male members of the public, known as 'strangers', were asked to leave.

However, in 1778 Captain Johnstone, who was unhappy that his male friends had been forced to vacate their seats, requested that "all strangers" (including women) should leave the House. From this date, women were refused entry to the chamber, and were confined to watching debates through the ventilation shaft in the roof space of the Commons.

The ventilator created a small and uncomfortable space, with access for only about 25 women.

Visiting the Commons, Maria Edgeworth could see from the ventilator "part of the Treasury Bench and the Opposition in their places - the tops of their heads, profiles and gestures perfectly" but "no eye could see the Speaker or his chair."

Women were able to hear some of the speeches below, depending upon the position of the MP within the chamber.