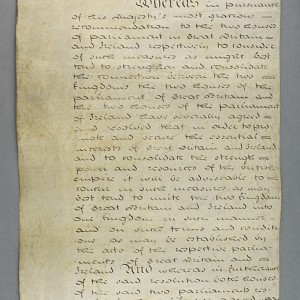 As religious tension in Ireland between the Catholic majority and the Protestant elite increased, Prime Minister William Pitt and his Irish Chief Secretary Lord Castlereagh became convinced that Union was the best means of securing the stability and loyalty of the Irish.

The war with France and the Irish rebellion of 1798 also led to fears that Ireland would be used as a platform for a French invasion of Britain.

After the Acts of Union were passed between 1800 and 1801, one hundred Irish MPs were admitted to the House of Commons. This brought the total number of MPs to 657.

The Act of Union defined the relationship between Britain and Ireland from 1800 until 1920 and led to the reform of Irish political representation. The 300 members of the Irish parliament were reduced to 100, with 64 representing the counties, 35 the boroughs and a member for Dublin University.

This redistributed power from the boroughs to the counties. The most controversial aspects of the Act were the trade and customs agreements, which became the focus of objections by nineteenth-century Irish nationalists.