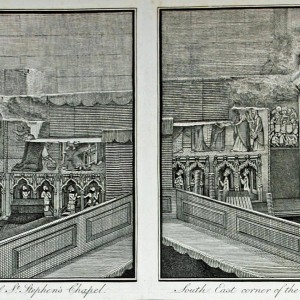 James Wyatt (1746-1813), an architect in the Office of Woods and Forests, was given the job of making room in the Commons for the Irish MPs.

He removed Christopher Wren's panelling and hacked back the walls to make space. "Large masses of stone were removed" and the medieval wall paintings at this level were destroyed. Wyatt also altered the entrance to the chamber, adding a floor to make the medieval porch into a smoking room.

Many people were critical of these alterations, including MPs who found the new chamber cramped. A series of articles in the Gentleman's Magazine complained of the "wanton and barbarous" way that Wyatt had treated the chapel.

The former lower chapel of St Mary Undercroft was also drastically altered by Wyatt. It was divided into sections to make a storage space, a coal hole and a dining room. The east side of the cloister was left unchanged and became a corridor, but the other ranges were "filled with menial apartments" and used for offices, a kitchen and lavatories.