Rediscovery of the Medieval Chapel 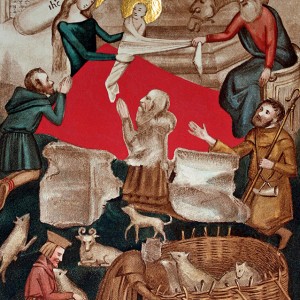 By the time that Wyatt was making his alterations, the walls of the original chapel had been covered with panelling for a century and very few people knew what it had looked like. From about 1790 however a group of antiquaries began investigations. John Carter (1738-1817) crawled behind Wren's panelling with a lantern, squeezing along "like Guy Fawks" through hidden spaces to see the wall paintings. He made drawings of them which were published in 1795 by the Society of Antiquaries. In 1807 another antiquary J T Smith published The Antiquities of Westminster about St Stephen's, with colour plates. Many wealthy people, including George III subscribed to it.

The chapel was badly damaged in the fire of 1834, although the walls still stood. The artist Frederick Mackenzie was commissioned by the Board of Works to make drawings of the ruins. He discovered a great deal about the original building, including the fact that it had once had a clerestory.

There was a public campaign to have St Stephen's restored, led by a number of young architects and the painter William Etty. Despite that, Charles Barry, architect of the New Palace, decided it was impossible to save it. The ruins of the upper chapel (and, it is now thought, probably most of the lower chapel as well) were demolished, probably in October 1837.

Image: ‘Specimens of Painting from St Stephen’s Chapel’, from J. T. Smith, The Antiquities of Westminster, London, 1807, plate opposite p. 249.