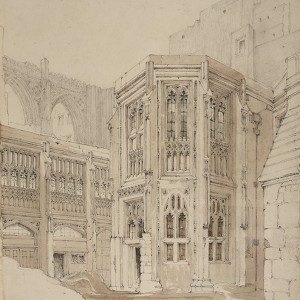 At the time of the fire, the double-height cloisters and oratory - or 'chapterhouse' - of St Stephen's were annexed to the late Georgian Speaker's House as a quaint gallery. The southern half of the cloister was severely damaged by the flames.

This pen and ink drawing looking south-west past the debris of the fire is by Anthony Salvin, Gothic architect and restorer of many medieval castles. Salvin was also an unsuccessful entrant in the competition to rebuild the Houses of Parliament, which was won by Charles Barry.