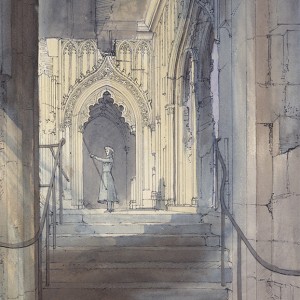 A watercolour by R.W. Billings, this time showing the entrance to the lobby of the House of Commons (formerly St Stephen's Chapel), on the right-hand side at the top of the steps.

A lamplighter, or perhaps a surveyor, stands beneath a Gothic doorway whose upper parts have been been destroyed by the fire. It was these winding corridors and stairways to the Commons' lobby which in 1812 were mentioned as one of the reasons why it had been relatively easy for an assassin to kill the Prime Minister, Spencer Perceval there.