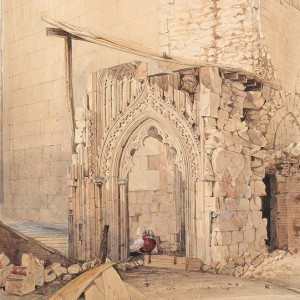 Nobody was confirmed as having died in the fire, though a number of people were seriously injured. However, salvage workers recovering stone, wood and metals from the ruins were certainly killed through falls or other accidents as they swarmed over the site. The peril of falling masonry led to tasteless jokes about the martyrdom of St Stephen, through being stoned to death.

This watercolour by George Belton Moore captures a moment of rest for one labourer. He is calmly smoking a pipe before demolishing the doorway next to St Stephen's, which appears to be the same one as the previous picture.