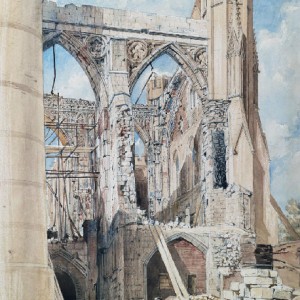 This watercolour attributed to George Belton Moore shows the east end ruins of St Stephen's Chapel drawn from the south.

Although dated 1834 on the mount, it was clearly painted later than this, as the chapel is now heavily scaffolded for safety reasons and a substantial part of the east end, including one of the towers, has been dismantled. This suggests a date of late summer or early autumn 1837, when demolition of the building occurred.

Part of the interest of this painting is that it was presented to Parliament by John Wolfe Barry. He was the son of Charles Barry, the architect of the new Palace, and perhaps inherited it from him.