The Fire from Old Palace Yard 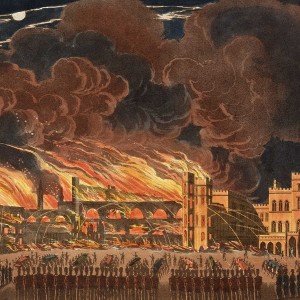 Fire broke out under the House of Lords Chamber at around 6pm in the evening of 16 October 1834. It spread through the Palace at an alarming rate, and reached the House of Commons Chamber shortly before 8pm.

The speed of its spread "was truly astonishing" recalled Pugin, who was in the crowd watching. From "the time of the House of Commons first taking fire till the flames were rushing out of every apperture [sic] it could not be more than fix or six minutes and the effect of the fire behind the tracery etc was truly curious and awfully grand".

The roof fell in with a stupendous crash almost exactly on the hour. In this crude engraving of that moment, the west end of St Stephen's Chapel can been seen as the roofless building to the left of centre with a black plume of smoke rising from it.