The Fire from the Thames 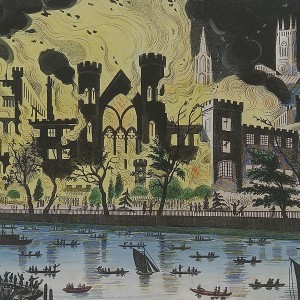 "Damn the House of Commons, but save, O save the Hall!" cried the Chancellor of the Exchequer in the middle of the evening, once it became clear that Westminster Hall was in peril and St Stephen's was beyond saving.

As a result of the diversion of the fire brigade and volunteers to the Hall, the view of the fire on the eastern(river) side of the Palace had at its centre the burning east end of St Stephen's. Its Gothic window tracery was illuminated by the uncontrolled flames within, as seen in this dramatic coloured woodcut.