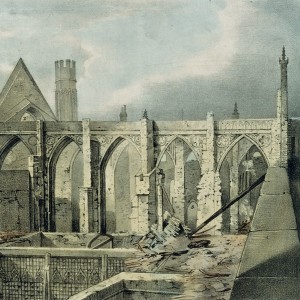 This is an unusual viewpoint of the ruins of St Stephen's from the north, sketched from the northern end of the east gutter of Westminster Hall.

Both east end towers are still intact and the outlines of the original windows are clearly on view. In the bottom left corner is the upper stonework of the cloister, the southern range roofless.

The revealing of the structure of the old medieval chapel after centuries of being covered up caused a sensation among antiquaries and the general public.