Ruined St Stephen's from the East 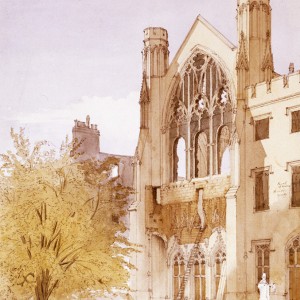 This watercolour of the east end exterior of the chapel, from the Speaker's Garden is by R.W. Billings, an architectural draughtsman, who painted many pictures of the ruins in the weeks after the fire.

They subsequently formed the basis for a number of the engravings in Brayley and Britton's History of the Ancient Palace and late Houses of Parliament at Westminster, published in 1836. The eastern wall of the chapel is precarious but still not shored up, a shell of its former self.