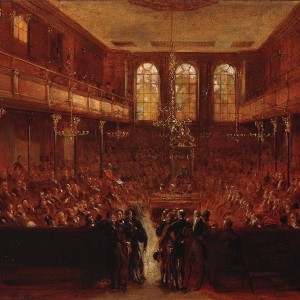 In 1833, George Hayter began work on a major painting to commemorate the first Parliament elected after the Great Reform Act of 1832. This preparatory sketch is one of the last images of the old House of Commons chamber, before it was destroyed by fire in October 1834.

Some features of the chamber could trace their origins back to the medieval chapel; for example, the opposing rows of benches reflected the original layout of the choir. In later years, new features were introduced, such as the galleries added in the 1690s by Sir Christopher Wren. Wren also redecorated the interior with Baroque-style panelling and columns.