Chorus vel Organa: Music from the Lost Palace of Westminster Release by Delphian 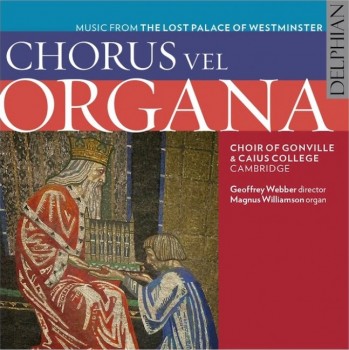 We are delighted to announce that Delphian Records has released a new recording of early Tudor music, directly associated with St Stephen's Chapel.

Chorus vel Organa: Music from the Lost Palace of Westminster features a selection of early sixteenth-century choral works, first performed at the lunchtime concert during the Project's Colloquium, held at the Palace of Westminster on Tuesday 30 June, 2015.
In this new release, Dr Geoffrey Webber conducts the Choir of Gonville and Caius College, Cambridge, with organ accompaniment by Dr Magnus Williamson.

This recording reflects the musical life of the College of St Stephen in its final years under Henry VIII. It also reconstructs both the wide range of singing practices in the great chapels and cathedrals and the hitherto largely unexplored place of organ music in the pre-Reformation period. The repertoire of music chosen reflects the chapel’s dedication to St Stephen, and the disc also features three items from the Caius Choirbook. Dated to the mid-1520s, this handsomely illuminated manuscript was owned by a canon at St Stephen’s, Edward Higgons. It now resides in Gonville and Caius College, Cambridge, and represents an exceptionally rare survival of such books from before the Reformation.

Prominently featured are works by the composer, Nicholas Ludford (c.1485-1557). Though not as well known as contemporaries like John Sheppard and John Taverner, Ludford had a longstanding association with St Stephen's, being appointed verger in 1527. He would have had an intimate knowledge of the building's appearance and acoustics prior to its conversion into the House of Commons in 1548. It is highly likely that several of his compositions were written with St Stephen's in mind. The Colloquium concert, featuring extracts from Ludford's Lady Masses and other works, was held in the surviving crypt chapel of St Mary Undercroft. This marked the return of Ludford's music to the Palace of Westminster for the first time in over four centuries.

Our Project's Principal Investigator, Dr John Cooper, noted the significance of this re-staging:

"This chapel was one of the most amazing ecclesiastical spaces in the whole of England.
It is so appropriate that this music is returning with Caius choir into that space for the
first time, I would like to think, since the Reformation.”