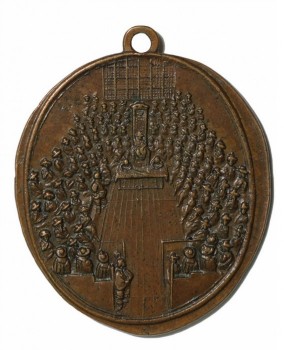 We are delighted to announce that the Project was featured in last Friday's Today in Parliament programme on BBC Radio Four. Our Principal Investigator, John Cooper, was interviewed by the BBC's Parliamentary correspondent, Mark D'Arcy.

In a novel departure from the coverage of current events in Parliament, discussion includes the origins of the Commons’ first permanent meeting place in the medieval chapel of St Stephen, and the problems of accommodating an ever-growing number of MPs into such a small space. The vast size of Elizabethan britches, and the solutions reached to ensure MPs could sit in the Chamber, served as a historical fact which “sounds like something out of Blackadder”, to quote Dr Cooper. This enduring legacy of the early-modern Commons upon the present Chamber was clearly significant.

“Our argument in this Project is that the
modern House of Commons that we know,
is the inheritor of some of the features
from the dim and distant past.”

The on-going work towards realising virtual reconstructions of St Stephen’s as a place of worship and as the House of Commons in 1707 are noted, as is a pioneering reconstruction of the Commons’ acoustic soundscape, lost with the building when it was gutted by fire in 1834. These reconstructions will be launched to the public during the Project Conference this September.

Broadcast at 23.30 on 6th May 2016, this episode of Today in Parliament is available to download as an MP3 file, or to listen to again, on the BBC Radio Four website. The interview begins at 19 minutes 50 seconds.