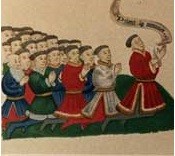 We are delighted to announce that Dr Alan Bryson and Jonathan Hanley have joined the St Stephen’s Chapel Project for the next few months. Both come to us after successful tenures on the AHRC-funded project, England’s Immigrants, 1330-1550 and are helping us foster impact legacies for the Project, as well as dealing with the infrastructure underpinning the Project Colloquium in June this year. We very much value their expertise on these fronts and look forward to working closely with them whilst they are with us.

As both Alan and Jonathan have previously researched the late medieval and Tudor periods, we also look forward to sustained discussions on areas of mutual interest relating to the history of St Stephen’s, and its transition from college chapel into Commons chamber.