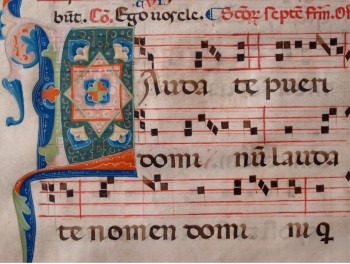 Principal Investigator John Cooper will join Dr Geoffrey Webber and members of the Gonville and Caius College Choir for a dedicated feature on BBC Radio Three’s In Tune tomorrow.

Hosted by Sean Rafferty, discussion will address the medieval fabric of St Stephen’s Chapel, and explore liturgical performance within its walls. The feature will showcase the early-Tudor composer Nicholas Ludford, a verger of the College at the time of its dissolution, and feature performances of his work. This will offer a rich vignette into St Stephen's daily round of musical and liturgical performance on the eve of the Reformation.

The broadcast will begin at 16.30. Further details of In Tune can be found on the relevant BBC iPlayer Radio webpages.